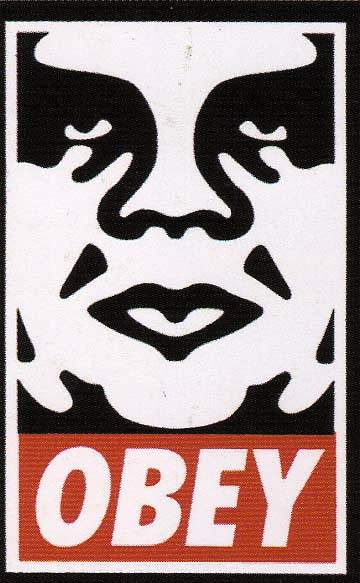 Come on, by now you have to have seen it. The Shepard Fairey Obama posters and images that have been an iconic symbol if our new Presidents' election days. His work is popular as hell and there's even a website that let you create your own Fairey-esque poster of yourself!
The thing everyone doesn't know, except maybe pro-active artists and people that actually read and keep up with the news, is that Shepard Fairey is quite a controversial artist. He uses images from questionable sources. He openly admits to his free use of grabbing images from wherever he can find them, including a google search, and adapting them in his work. There are those that champion his defiance and his huge sense of graphic style. There are those that are horrified by his practices and expose him when his actions deem it necessary.
There's an absolute MUST READ article over on the Myartspace blog about the source of one of Faireys' works. In essence, a blogger named Michael Cramer took it upon himself to locate the source of a particular photo of President Obama that Fairey freely admitted he simply Google searched. Sure enough, the photo was found, and then the photographer! Questions were asked of him as to why he isn't pursuing his interests on this particular image. Since he was the creator, he has rights to it's use...including it's use in these political posters. The ArtSpace article is hugely informative. It's also got a serious comment section a mile long.

Definitely take time to acquaint yourself with these copyright issues. This is a case that is easily understood and followed. Put yourself in the place of each of the players...Shepard Fairey and his production crew, Jim Young, the photographer. Put yourself in the place of the decision makers...Obama... and yourself. Keep informed. Make an opinion. Join the discussion. Help decide the future.
Wow.
Upon writing this post, even as I write this...I found this little conversation on Flickr, where perhaps ANOTHER photo was the source. Obviously....this is a sticky issue. The source of the photo isn't clear to anyone but perhaps Fairey and his team.
Thought provoking stuff.
Posted by Julie Takacs at 5:35 AM

The work of Fairey is far away from the original photograph. He has made it so different and his own. He has made it a thousand times better, a provocative image (the word helps, even though it is just a word). And the color, forget about it. The artist took an OK photo and made history, not just art history, but history. I think if the photog sued, he would get famous for his suit (not his work). But I doubt that he would win.

What happened to Andy Warhol and the Flowers? And the Brillo Boxes? Who won those suits?

...the fact is Richard Prince, in the above case, will make much more money off this than the original photographer.

PS: we now know that the photographer was NOT Mr. Young; it was Mannie Garcia. So if two different photographers shot such incredibly similar images of Obama, how much originality can be attributed to the photo(s)? This sounds like an issue of "thin copyright," where there's little creative expression involved - which redounds to the benefit of a fair use claim on the part of the borrower/transformer.

I suggest you read more of the criticism Brian Sherwin has made of Shepard Fairey on the Myartspace Blog. Fairey is a hypocrite. Look up what he did to Baxter Orr.

Critic Bryan Sherwin has discussed in his MyARTspace blog How a Phantom Street Artist from Los Angeles has challenged Fairey to a Dual in the Cage where street cred now hangs in the balance. The Phantom Street Artist has legitimately critique Fairey’s no couth and sophomoric practice of taking credit for important historical work and turning the work into novelty and multiples,
“Shepard pillages the work of important political and cultural movements and economically authors the oeuvre of artists like Rene Mederos and other political activists along with their motifs and images to advance his own market and public relations interest.”

Shepard Fairey does not represent the voice of the “populace” and is instead the voice of the Elitist Media disguised”. After review its time to call into question Shepard Fairey’s unethical cultural practices of producing art that lifted from historical sources specifically most recently from an AP photographer for the OBAMA campaign. Fairey has years of exploitative actions in manufacturing radical chic as commodities.
http://www.art-for-a-change.com/Obey/index.htm


There is a strong organic movement which is being directed towards unveiling individuals like Con Artist Shepard Fairey who are exploitative in their fundamental practice of presenting themselves as Leftist Politically Correct Artist when in fact they are Post Colonial Capitalist merchant who have exploited 3rd world cultures and important revolutionary movements and author’s violating a decade of copyright laws laughing all the way to the bank.

This is an important issue to address and understand as Fairey is operating as a wolf in sheep’s clothing presenting himself as a Street Artist who is citing creative commons when in fact he is hiding under the umbrella of Fair Use. The artist says he is defending artist everywhere when he is only protecting his assets and other potential lawsuits. The so called rip-off Artist Shepard Fairey is facing serious allegations of Copyright Infringement from the AP.
Each time the RIP OFF ARTIST Shepard Fairey is legitimately critiqued in the Media he and his minions can only respond by hurling insulting with epitaphs like they must be HATERS or manufacturing smear campaigns against important social critics Brian Sherwin, Lincoln Cushing, Josh MacPhee, and Favianna Rodriguez, Mark Vallens and The Phantom Street Artist. He and His camp of hired publicist have no reasonable argument or substantial response to Fairey’s closeted ten year decade of copyright violations and infringed actions. It’s a well disguised campaign to save face from being revealed of its crisis management.


The Fairey obviously operates from a sole agenda to get publicity today worry about the media lies tomorrow... What an embarrassment to RISD and the Great Obama Campaign!