Steven Specht here...
I am VERY excited to announce that Joel Lambeth has posted the call for "The Power of N" collage project for this year. See more at: http://tothepowerofn.joellambeth.com/
Posted by Monkeybrain at 8:15 AM 2 comments:

The End is Near - The Pictures

Some shots from the opening:

Fascinating work by Sylvia Netcheva. She used handmade paper as her substrate. Upon close examination there were elements embedded in the work. I liked this idea very much. Her pieces were sculptural and very expressive. 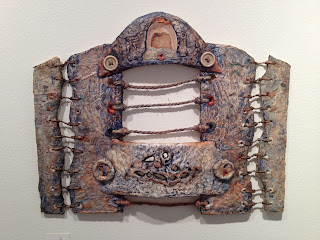 This closeup shows some of the intense detailing
on these pieces.

Kevin's heavy gloss work was amazing in it's thick textured surface. I liked the abstract look, the various interesting papers he chose, and the small intensity of these works. I wanted to talk to Kevin more, but the busy show prevailed!


I liked the work of Pierre. The diagonal words on the top right piece placed at that angle really worked. The colors he chose were rich and full. I liked the way this work was on canvas...and required no mat or frame. I didn't photograph it, but the images rolled around the edges.

Really detailed stitching and very meticulous placement was required for this work by Deborah Snider. She had some really beautiful works and they crossed the lines from collage to quilting.

As is usual for Steven, his meticulous work showed attention to detail. I found his work and the work of Frank Viola quite similar. You can tell these 2 have a similar philosophical approach to the work.

These are meticulous and colorful pieces by Frank Viola. During the panel discussion, I could feel how deep Frank goes into his mind as he places his ephemera.

My stuff. Hanging on the wall. Like a little village. 4 of these works were 3d, sticking out like the real building they represent.
Aprile had a very interesting display. These pieces all in matching frames with their similar tones were quite striking. I liked the way they all looked like a dissected book on display! These were works with a nautical theme.


I had my camera in my hands during the panel discussion. Here's a shot of 3 collage artists deep in thought as they try to describe the creative process they go through.


This series of works by Jonathan Talbot was a striking presentation. These pieces drew you in, you wanted to get up closer and see what these people were doing. The sepia toned background provided a good foil for the tints in the photos.
Dale's intriguing work also lended a vintage aspect to the show. These fragile pieces made it all the way from New Zealand to the states and survived intact. The umbrella particularly spoke to me, in it's very decayed state it reminded me of lace.

The show still hangs in the gallery....if you want to see it yourself! This show ends on April 30th.
More info here

The End is near - The Words

Driving to Utica on the night of the opening, various thoughts crossed my mind. I've exhibited with other people before, but I have never had the privilege of attending since these shows were too far for me to travel. I've also exhibited solo a couple of times. But this time, I was going to be in an exhibit with other folks and on the scene to meet them. I get a bit of anxiety when I have to deal with a lot of people, especially ones that I don't know. I tend to talk alot and I get clumsy and lost in my words when I speak so this isn't usually a good feeling! I worked on pulling myself together. This was going to be easier for me than for artists who were traveling a far distance to attend this opening. I only had to drive an hour.
As I entered the gallery I was immediately struck by how many people were already there! The gallery at Utica College has such a nice ambience! In the adjacent room, a sweet jazz band was playing music for us  and refreshments were on hand. They had several choices of water infused with various fruits and vegetables....I loved the strawberry water and Travis mentioned the cucumber water as being delicious.
I walked over to my corner where my artwork hung next to Jonathan Talbot's. I saw a man in a grey suit with a beard standing by his work and it occurred to me that this must indeed be Jonathan Talbot himself! I have wanted to meet him after we have had a few phone call conversations already and he is an interesting character. I walked up and introduced myself to the man and said "You must be Jonathan Talbot!"
"No, actually I'm not." The man replied.
"Oh c'mon! I saw your picture online. Your work is really interesting. I like the way the work is floating in the frame."
"No, really. I am not Jonathon Talbot." Again the man gently replied.
Hmmm. I thought quickly to myself. What an odd character! He doesn't want to discuss his work! The grey suited man strode off to look at the other collages and I considered the situation to myself. There was a lot of confusion with people coming in and I quickly forgot this incident. Later on, my friends Travis, Josh and Jen showed up. Travis wanted to meet Jonathan too, and I told him I would point him out and relayed to him my strange encounter. Before I found the grey suit man again, a tall man in a darker grey suit walked over to me and introduced himself. "Hi, I am Jonathan Talbot."
You can imagine my insides turning to jello at this point as I realized that indeed the grey suit man was really NOT Jonathan Talbot! Travis was nodding at me from across the room, since he heard the introduction and I said to myself...this is the reason you get nervous prior to shows!!!
I laughed it off, especially since I didin't see the grey suit man again. I feel sorry for my actions. I am certain he left scratching his head and muttering to himself about crazy artists!

After this crazy start, I could do nothing but enjoy the show and laugh it all off. I introduced myself to Aprile NotPaper Elcich and her sweet husband Jory. They made the trip all the way from Canada and I was going to do my best to not leave them alone standing there and make them feel welcome. I had hoped to talk more with the other artists but it was so busy! Many people attended and I was surprised at the turnout.
The gallery is run by Caroline Whitefeather. She has several capable young students working in the gallery and doing various tasks. They were excellent docents that night. More than once, they brought over interested customers and patrons that wanted to talk about the work. I was happy to explain my thought on the theme of the show. It's really a side of the art process that we don't get enough of. it's tht interaction with others, that ability to see their response to your efforts and ideas, that is so valuable! I try to work in a vacuum so that my ideas come from ME> I know all too well my tendency to copy others without trying to. It just happens. In this isolation, you really don't get much feedback. Like a mad scientist you mix those papers like chemicals and out turns a smoking test tube. Getting a chance to use the chemical is a necessary facet!
Many interesting discussions were had. Janet and Matt Stanley came to see the show. They publish Pulse, a magazine for the Utica scene. They are friends of mine and also have purchased my work before. I was glad to have them on board, since this show is something that fits their readership. I also got to speak with Barbara Boucher, who is such a patron of the arts! She was a godsend for me and Steven during our solo shows at the Mohawk Valley Center for the Arts and continues to be a patron of our arts.
The people at Golden Arts attended the show and were so gracious. They introduced themselves and expressed their ability to provide an artist tour of there facility in New Berlin. I am quite excited about this and plan to make a trip in the near future. It's so great to see these nice people out in the field meeting with actual artists that use their products. I love it that this company is in upstate New York. Our region needs more of this type of small business!
After all this tedious and exciting art talk, we were ushered into the main room for a panel discussion. It was nice to sit and talk with the public about their perception of what we do. I was fascinated by the answers of my comrades and found that experience to be less intimidating than I had imagined.
I fiddled with my iphone and took a couple of closeups during the discussion, but I learned that next time I need to keep my hands free of thing to play with! I am a nervous person, and don't need toys when I am on stage!
After the show the artists all met up at Marin and had an absolutely amazing buffet of Indian food. I was still exhilarated from the show experience and of course I couldn't gorge myself like I would have. I have to go back there, the place had most excellent curry!
A great night came to an end. I rode the wave all the way back home to Canajoharie thanking Steven under my breath for his efforts in pulling this all together.

Posted by Julie Takacs at 3:47 AM No comments: 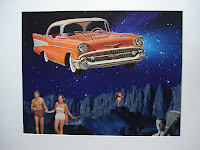 Steven Specht here...
Here's a new piece I did as a demonstration at the Kirkland Arts Center in Clinton, NY on Sunday. I have decided to donate it to help them in their fund-raising efforts. I entitled it "Choices" because the characters seem to have made various choices in life. Enjoy!
Posted by Monkeybrain at 1:12 PM 1 comment: 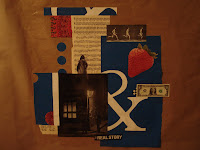 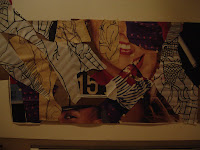 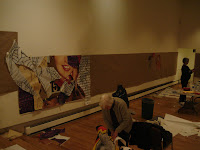 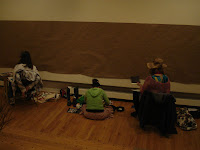 Steve Specht here (one day after April Fool's Day)...
I had a REALLY nice time yesterday at the Kirkland Art Center for the Great Continuous Collage Project! They have paper up on the walls and plenty of materials for folks to make collage. It's an on-going community event. Go try it out! See "kirklandartcenter.org" for more details. Enjoy!
Posted by Monkeybrain at 3:49 AM 1 comment:

end of a blog

Steve Specht here...
Just wanted to share what I just posted n my blog:
"Looks like I'm gonna have to close this blog down. Seems as though the copyright laws have finally caught up with me. Thanks for your interest and support over the past couple years. It's a very sad day for me. Collage is dead.
Star date - 04-01-12"
Posted by Monkeybrain at 4:35 PM No comments: