The Chicks Along The Canal show came of pretty well. I never expect to sell much locally, since there is such a small population here in upstate NY. I was surprised to sell one piece and one of my hand bound books! In fact, I made as much in art as I did in antiques. This was really cool, but basically it was a slow show.
I didn't sell any relatives. Actually, I cringe when I look at this series. I feel like they were sell outs...art for money. Pimp art. Something I hate, and usually avoid, since what I think the public wants, is usually wrong! So stick to your intuition, I told myself. And that's where my head is at now.

I am working on watercolor pieces that I can later on expand on and create collages from. It's tedious. It's concentration busting! It's hard! But I love the challenge, and I believe that this road will lead to interesting mixed media, once I get enough of my own art in stock to work with.
I am trying to gain some discipline, by working on pieces over and over until they are what I want them to be. So far, after 3 tries on one particular scene, I can see improvement, but I can't say I have reached on paper what I can already see in my mind! 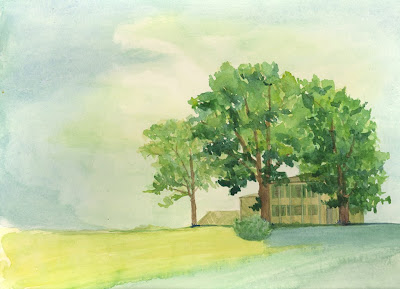 Tall house on Blaine Rd. # 1
Trying out Arches cold press. I am usually a hot press kind of girl.
Washed out work! The building poses serious problems.
Sense of value is missing. 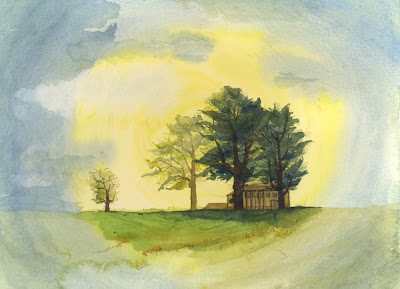 Tall house on Blaine Rd. #2
AAAh. Hot press paper! I like it better...but it seems like an altogether different process than working on textured cold press.
I am attempting to create a vignette...a shadow around the outside. It almost worked.
These are darker colors....so some value was achieved. However, I lamely copped out to pen and ink to see if I could get a better building. Obviously this didn't work.
I was enjoying painting these trees, but now they look contrived. 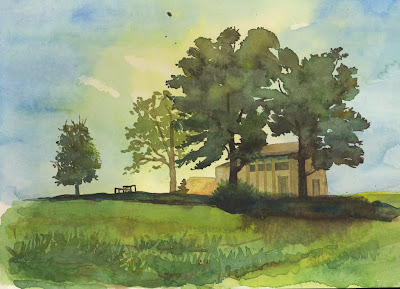 Tall house on Blaine Rd. #3
Went to see Wyeth paintings at the Hyde. Upon looking at the very first painting, I realized what my work was missing...100% value! This was the first piece I did after viewing his work.
I like it better than the others.
Lost the vignette idea!
The building is still quite lame, but at least no pen and ink this time.


I want to get a very desolate feeling in this piece. So far, I am not there. I think it has to do with the placement of the objects against the paper space. I need bigger paper, so these objects can appear smaller...and more isolated. The next attempt will be on larger paper. These were on 9 x 12 Arches Hot Press...next time it will be 11 x 14 L'Anaquarelle hot press. Not sure I am ready for huge paper yet. That creates all new problems, and I really want to land this so I can move on!
Posted by Julie Takacs at 11:22 AM No comments:

A gallery of Long Lost Relatives 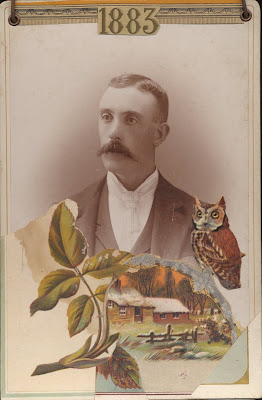 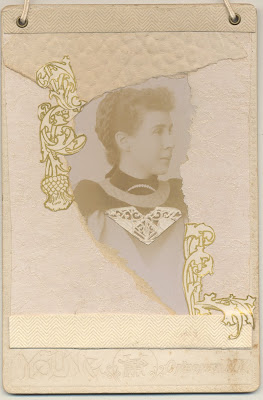 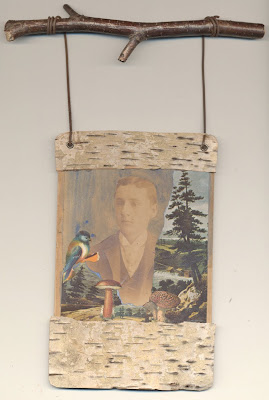 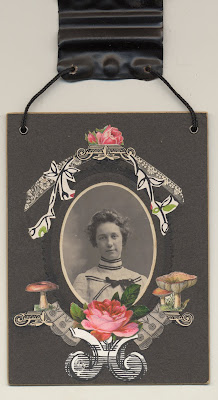 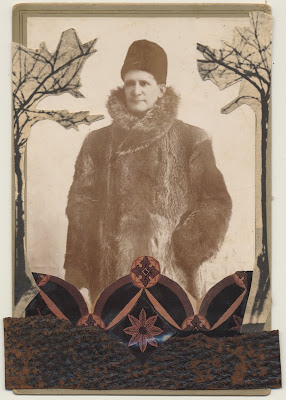 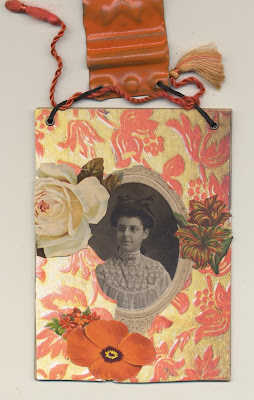 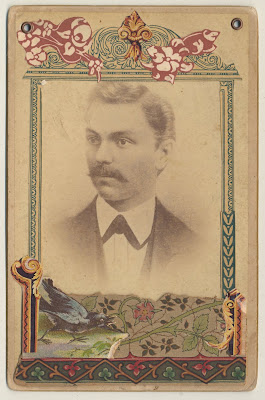 Frank LoPratt
Posted by Julie Takacs at 6:12 AM No comments:

Chicks Along the Canal

This Saturday, I am participating in the debut of a new show called Chicks Along the Canal. Located in Little Falls, this show highlights women entrepreneurs of the Mohawk Valley. For this particular setting, I am bringing a limited amount of art and upscaled jewelry I have been working on. I will be filling the rest of the booth with antiques from Fort Plain Antiques, my fiancé Chris' antique store.
For this show, I decided to see what kind of collage craft I could do that would be suitable for the mainstream, but that would also challenge me and keep my interest. I came up with the idea of Long Lost Relatives. 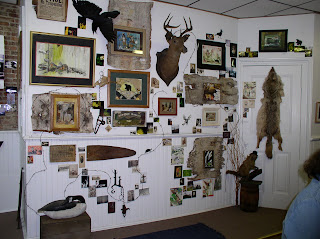 One of the walls with many photos at my first show in Norwich, NY
The first solo show I did, I hung up probably 100 vintage photos along with my collage work. There were people that wanted to buy the photos...and of course I was trying to sell the art! I remember the intrigue that was caused by people seeing folks of other times that look liked their relatives. It was this behavior that prompted me to do this series. These are smaller pieces, approx. 4 x 6 or so each. The smaller format allows for smaller prices, which should appeal to folks in this economy.
I am nervous about mixing the booth with art and antiques, it's my first time doing this. Hope to have good reports for you after the show!
Posted by Julie Takacs at 5:55 AM No comments:

The 2010 Regional Exhibit at the Mohawk Valley Center for the Arts in Little Falls (juried by Andrew Albertson from the Arkell Museum) is in progress from now until August 27th, with the reception on Sunday, August 15th. The theme for this year's exhibit is "Images of the Mohawk Valley". I was a little concerned that a collage inspired by this theme might turn out to look more like a promotional tourist poster than a piece of art, but I was motivated to try to get a piece accepted into the show. The image (8" x 18") above is my end product (and was accepted). I was inspired a bit by Julie Sadler's collage work which successfully incorporates strong tactile elements and decided to use pieces of birch bark, an arrowhead and several Herkimer "diamonds" (unfortunately, those are difficult to see in this image). Hope you get a chance to check out the show. Enjoy!
Posted by Monkeybrain at 4:32 AM 2 comments: 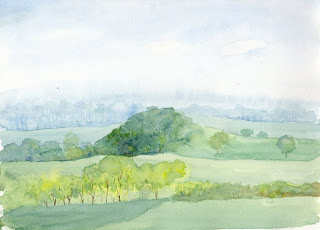 Cunningham Road from the curve
Been practicing with watercolor, and perhaps these practice pieces can be launching pads for new stuff. Been driving around looking at the Mohawk Valley landscape, and while moving along, imagining how it would be possible to paint what is seen with simple and pure paint. Seems like an impossible task.
This particular piece was done on a humid and hot day (aren't they all lately?) when the haze is so thick you can barely see the distant hills.
Posted by Julie Takacs at 12:24 PM 2 comments:

Each time this girl posts, she gets weirded out by how many times the word "I" appears in the post.
So a personal decision was made to avoid that word if possible. In my last post, it was beyond difficult to do this, and a story appeared instead. When a blog is written in the first person, it's probably unavoidable to use "that" word, but when it's read, it seems really egotistical, or perhaps even arrogant.
If the word is not used, well this sounds just plain silly!
Posted by Julie Takacs at 7:34 AM 2 comments: