Steve Specht here...
I am very pleased and excited to notify anyone who might be interested that Jonathan Talbot will be offering a two-day collage workshop at Utica College next April 21st and 22nd (2012). This is a great opportunity to learn from one of the best! Go to Jonathan's website for a more detailed description and to read comments and see work from previous workshop participants (including me!). http://www.talbot1.com/workshop/index.html
Posted by Monkeybrain at 7:44 PM 3 comments:

A Book About Death is still quite alive. To quote the ABAD-23 site...


"The ABAD Project was born in 2009 at the Emily Harvey Foundation Gallery in New York City, the brain child of Paris-based American artist Matthew Rose. ABAD has since grown into an international art movement that continues to sweep across the US and the world. It has traveled to Brazil, Belgium, the UK, Croatia, Italy, Bosnia & Herzegovina, and Mexico, touching artists everywhere.
This will be the 23rd ABAD worldwide, the first on Long Island’s beautiful South Shore."

I participated in the first exhibit, but have not been in any of others. It was time for another round. So I did a pair of works for this exhibit and I tried to use as much symbolism as possible. For this project, the artist is instructed to provide 2 pages, one for the exhibit and one to be bound in a permanent book..."thereby furnishing an Omega to the Alpha of the Unbound Book of the original show".
On the fronts of my 2 pages, for the base paper I used a grave rubbing. Pen and ink and acrylic add a splash of color, while black mourning lace adds a bit of drama . There's a nude male on one page and a nude female on the other--symbolizing the equality of death. Both figures are literally in bondage, and also exhibiting the "ties that bind" with threads--where I have stitched the front page to the back page.
The back pages consists of portions of a cemetery log book. One of these is particularly endearing and charming, mentioning a certain "John Burrly, buried in the old ground by side of his wife. $5.00 paid the association for that privilege."
It's all still quite amazing to me, how the emotions about death of one man, in this case Matthew Rose, grew into a worldwide phenom, which is far from dead. Ray Johnson was the originator of the whole concept and although he is gone, his ideas and thoughts live on also. Perhaps this is the ultimate irony of it all, and I sometimes wonder if Ray knew this. It's all such a delicious mystery, the unfolding of life and death!
I send this package to the gallery today on the 13th. For you Ray. 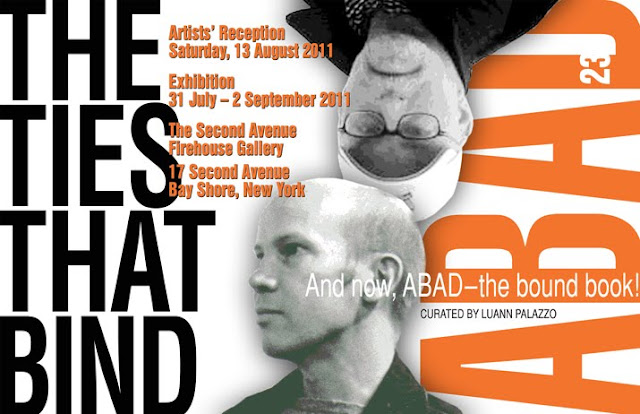 More exhibit information can be found here on the ABAD 23 website.
Posted by Julie Takacs at 6:44 AM 2 comments: 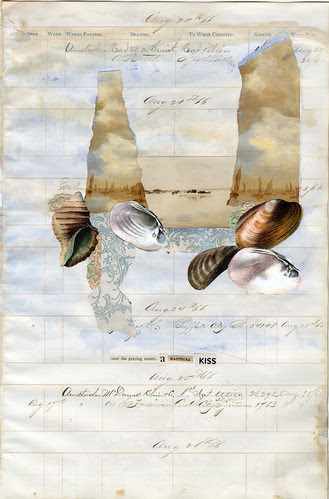 Notice, the dates on the vintage journal correspond to the dates of our trip... 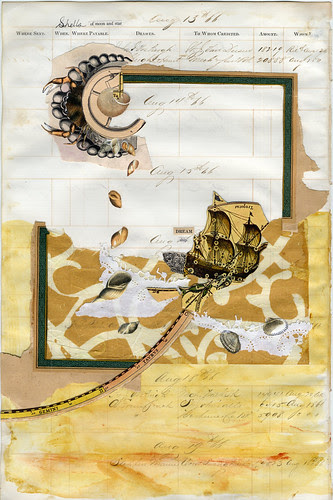 Aaaah. The Days of Summer 2011.
So far my days and nights consist of dreams. I am in a land within my head, and dreaming of ocean love. My fiancé Chris and I are getting married next month...August 20. Our honeymoon will be spent in BoothBay Harbor Maine. I am making this special wedding album for my husband-to-be. It's been fabulous fun to be back on the collage table after the rigorous exercises I have put myself thru as of late. I cannot believe how the inspiration just gushes when my mind is "in" something. I am so very excited, so this art feels like an overflowing tsunami.
Please enjoy this page from the wedding album. It's my personal fave.

To The Power of N... revisited

Steve Specht here...
I've been selected for this great event! So excited and nervous at the same time!
http://collagista.wordpress.com/2011/04/30/to-the-power-of-ncall-for-submissions/
Posted by Monkeybrain at 7:00 AM 1 comment: